Although it sounds a bit strange in English, the term makes a lot more sense in Chinese. It defines a new urban center where cultural elements such as museums, shows, themed attractions and restaurants, lifestyle retail, etc are forming an attractive and creative environment – branded as a destination – for the enjoyment of visitors, both locals and tourists.

It is not too different from ‘urban renewal projects’ in the West (e.g. Sydney Darling Harbour, London South Bank, Paris Bercy Village), except the driving force is not that of a city government trying to ‘revive’ abandoned areas and generate growth but that of a property developer trying to make profit through retail and residential sales.

I decided to go to Shenzhen, just outside of Hong Kong, to experience some of the precursors of the Cultural Tourism City, before Dalian Wanda invented the term. My first stop was OCT Harbour, the latest development from China’s leading theme park operator.

OCT, which means Overseas Chinese Town, is a Shenzhen-based company, which was the first to develop large theme parks (Happy Valley, Windows of the World, etc) in return for land to build large-scale residential areas.

OCT is probably the most experience Chinese company in building tourist attractions. And OCT Harbour is no exception. The development surrounds an artificial lake and comprises a massive visitor center, lifestyle mall, bar street, IMAX cinema, aquarium and more.

Foreign consultants (incl. AECOM) advised OCT for this new venture and it shows. When walking around – and for someone who has travelled a bit – it feels like a mix of Sydney Darling Harbour, Shanghai Xintiandi and Disney World Showcase in Orlando.

OCT fulfills its cultural mission. There is a rich offering for kids with the nightly WaterShow, Myrules World role-playing amusement center, Dream Aquarium and IBOBI – ‘an international learning and development center which focuses on the early childhood development of 0-6 years old kids and their parents incorporating education, science, technology and art with interactive entertainment media’ – and for adults there is the giant IMAX theatre, a small art exhibition space in the mall and the beautiful pebble-shaped “Creative Exhibition Centre”.

Here is a video for you to get a feel for OCT Harbour. I went on a Tuesday night and it was a bit empty; the mall had just opened and not all tenants had moved in. It looked like a metro station was under construction at the entrance, which will definitely help drive more traffic.

Next stop was Sea World, a China Merchants Group development a bit further West from OCT Harbour and also near the coast.

China Merchants is the owner of a huge piece of land in the area; they started with a themed central plaza housing food & beverage outlets and the Minghua Cruise boat permanently moored and turned into a boutique hotel. Recently a swanky luxury hotel under the Hilton brand was added together with a large L-shaped open-style retail area. A number of residential buildings are under construction all around, of course.

The new Sea World experience is similar to OCT Harbour with an artificial lake and a cultural & lifestyle offering: panoramic open fountain show, IMAX cinema, restaurant and bar street. The developer is also under discussions with the Victoria and Albert Museum (V&A) to develop a new design museum. 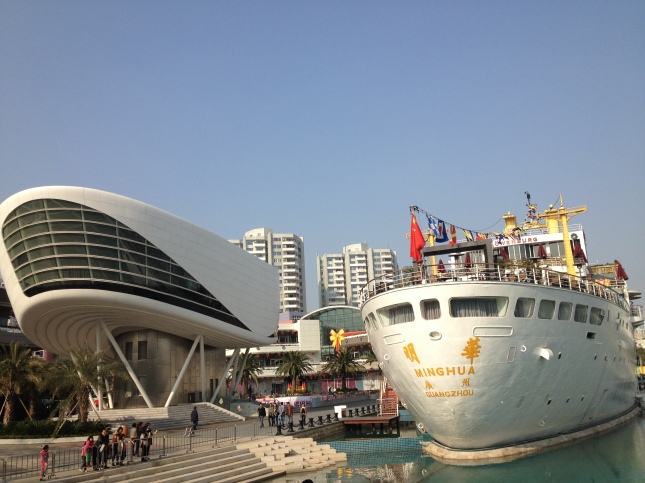 I picked up the brochure and found the description – poorly translated from Chinese – of the development very insightful: ‘The urban landmark of Shenzhen. It gathers most charming elements in life, and becomes a model in terms of city upgrade and leisure block culture reforming’. Underlying is the strong push in China for soft power, which commands a change in focus from simple amusement to things more cultural and lifestyle.

Before leaving Shenzhen I went to see the site of the future Upper Hills. This development to be completed in 2017 will comprise office towers, a residential complex, significant retail and extensive outdoor space and parkland. 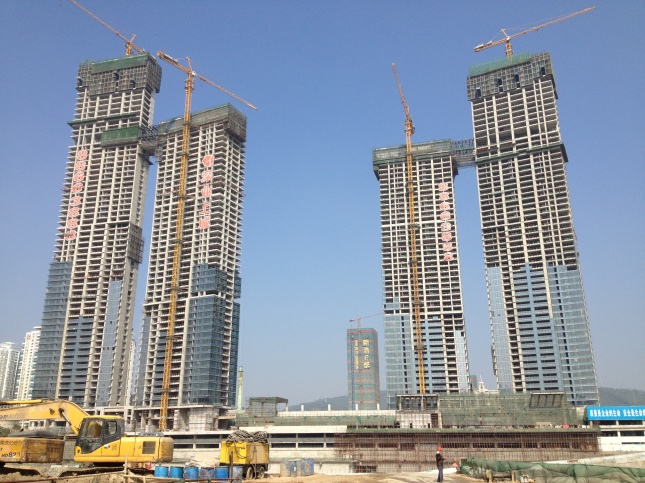 According to its developer – a subsidiary of the Shenzhen government – it should become the premier lifestyle destination for the local community and the Southern China district (meaning tourists). Slightly more vertical – with two of the city’s highest towers – Upper Hills shares the same needs as OCT Harbour and Sea World, which is to sell (more) expensive residential units and drive traffic for tenants paying high(er) rent; and the new ‘model’ is the Cultural Tourism City, isn’t it!

Now back to Dalian Wanda, which triggered my visit to Shenzhen and this article. Their ambitions are very high but when one looks in details at what they plan for their Cultural Tourism City projects, it does not seem too different from what can be found at OCT Harbour and Sea World: hotels, lifestyle mall, IMAX cinema, bar street, stage show (in collaboration with Franco Dragone) and indoor entertainment center.

The difference is that Dalian Wanda plan to go into lesser-developed areas – Shenzhen is very different from the rest of the country – and are very good at communicating on their ‘cultural’ contribution to these cities. For example, they formed the Wanda Cultural Tourism Planning & Research Institute as an attempt to ‘own’ the Cultural Tourism City model and above all legitimize the access to prime sites in China’s key cities.

I am personally yet to be convinced that the Cultural Tourism City model works and that these new cities are sustainable for the needs of the future generations. It is a tough exercise when one developer, whose attention can easily shift, owns the entire real estate. I have seen too many ‘abandoned’ buildings, and even entire neighborhoods, in China.